You killed your European son
You spit on those under twenty-one
But now your blue car’s gone
You better say so long
Hey hey, bye bye bye
(Lou Reed)

It is a wooden panel that you see, a found object that attracted the artist’s interest because of the reflections of natural colours that it gave off. The intervention is given only by the yellow stain, the sky-blue strip on cardboard, the three red dots on the already existing holes, the blue plastic cartridges on the nails, which also already existed, the choice of the frame, in terms of material and size.

The reference to the raw material is obvious. An original material that speaks for itself.

The minimal intervention dominated by pre-existing presences, and therefore by chance, is a fundamental reference for the artist.

The rudimentary, unfinished, imperfect, but unique, inescapable and definitive act. Disregard for conventions and style. The respectful dialogue with the material and the intrinsic and original form of the work. 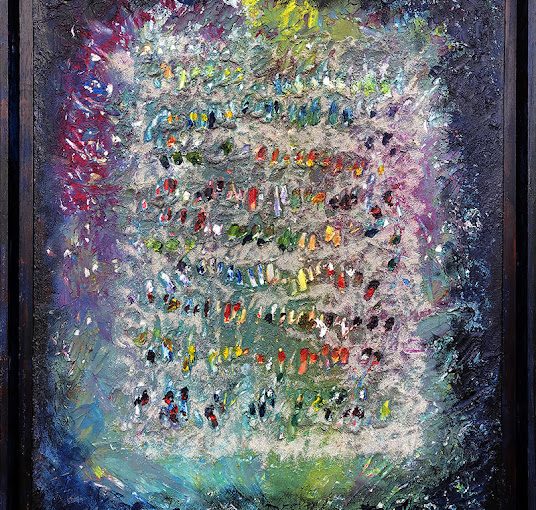